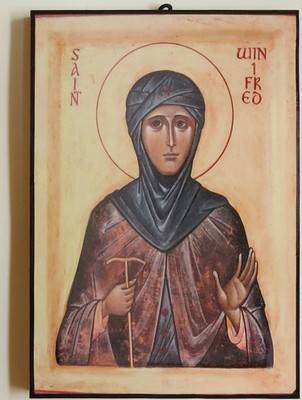 According to legend, Winifred was the daughter of a Welsh nobleman, Tyfid ap Eiludd. Her suitor, Caradog, was enraged when she decided to become a nun, and decapitated her. In one version of the tale, her head rolled downhill, and, where it stopped, a healing spring appeared. Winifred's head was subsequently rejoined to her body due to the efforts of her maternal uncle, Saint Beuno, and she was restored to life. She later became a nun and abbess at Gwytherin in Denbighshire, and Caradog, cursed by Beuno, melted into the ground. More elaborate versions of this tale relate many details of her life, including Winefride's pilgrimage to Rome.

A healing spring at the traditional site of her death is now a shrine and pilgrimage site called St Winefride's Well in Holywell, Flintshire, Wales known as the Lourdes of Wales.