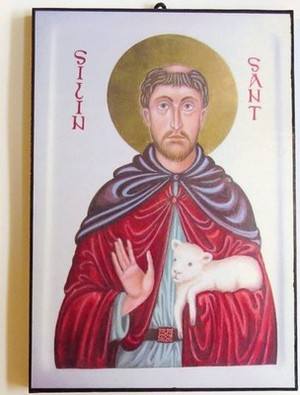 Out of stock OR only available in-store.
0 in your basket
View Basket Checkout

Also known as Sulien, Silin lived in the 6th Century, and was the son of a Welsh prince. Although born into a life of privilege, whilst he was still young he decided to turn his back on his inheritance, and ran away from home to a life of poverty and austerity in the monastic settlement in Meifod, under the abbot Gwyddfarch.

His father was angry with his decision to turn his back on his responsibilities, and made every effort to make him return. In response, the abbot sent Silin to Bardsey, where he established a monastic community. He lived there for seven years, until he was summoned back to Meifod by the abbot. When the abbot died, Silin was elected in his place.

By this time, his father had died, and his brother became head of the tribe. His brother's wife became infatuated by Silin, and pursued him. In order to avoid problems, Silin left for Builth, but still an object of pursuit, he fled to Brittany, where he settled near S. Malo. Here, he founded a small, but renowned monastery in Rance. Although he never returned to Wales, he sent his gospel and staff back to the monastery at Meifod, as a token of his love.

Llansilin in Powys is named after the saint.