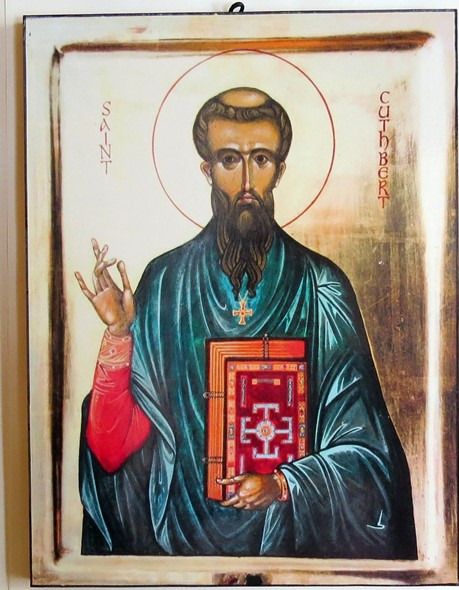 Saint Cuthbert (c. 634 – 20 March 687) was an Anglo-Saxon monk, bishop and hermit, associated with the monasteries of Melrose and Lindisfarne in the Kingdom of Northumbria.
In 676 he adopted the solitary life and retired to a cave. After a time he settled on one of the Farne Islands, south of Lindisfarne, and gave himself more and more to austerities. At first he would receive visitors and wash their feet, but later he confined himself to his cell and opened the window only to give his blessing.
In 684, Cuthbert was elected Bishop of Hexham, at a synod at Twyford (believed to be present-day Alnmouth), but was reluctant to leave his retirement and take up his charge; it was only after a visit from a large group, including king Ecgfrith, that he agreed to return and take up the duties of bishop, but instead as Bishop of Lindisfarne, swapping with Eata, who went to Hexham instead. He was consecrated at York by Archbishop Theodore and six bishops, on 26 March 685. After Christmas, 686, however, he returned to his cell on Inner Farne Island, which was where he eventually died on 20 March 687 AD, after a painful illness.
He has been described as perhaps the most popular saint in England prior to the death of Thomas Becket in 1170.